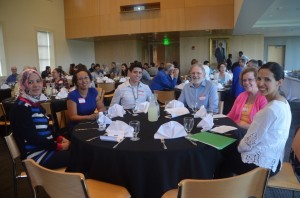 On Wednesday, Ian wrote an excellent post about how we–the educated, the elites–aren’t exposed to, and so don’t understand, rural America. He described how this lack of understanding enabled us to caricature and demonize rural Americans, which contributed to the rise of Trump. Today, I saw a similar blog post circulating, written by someone who grew up in a small town in the midwest, describing how their the lack of exposure to Muslims, Latinos, African Americans, LGBT people, other minorities, and liberals also allowed hatred and isolation to fester.

Ok, so whose job is it to get out there and talk to people? This is the debate I’ve been seeing emerge recently among my friends. Is it our (liberals, urbanites, the educated) responsibility to reach out to them (conservatives, ruralites, the working class) because we’ve ignored, stereotyped, and alienated them? Or is it their responsibility to reach out to us, for the same reasons?

There are two versions of this debate. One version is moralistic (i.e. whose responsibility should it be to reach across the aisle?), has only subjective answers, and is therefore very likely to be a rabbit hole of further hatred and division. So I’m not interested in this version.

The other version is pragmatic (i.e. who is able to reach across the aisle?). Here, I have to go with Ian–it’s on those of us who are mobile and have the means–but with a few qualifications. First, while Ian might seem to have suggested this wealthy, mobile category means mostly liberals (because it certainly does include liberals like him and me), I would say that it certainly also includes wealthy, mobile conservatives (like Peter Thiel, and of course Donald Trump himself). Second, while I am no fan of divisive and infantilizing forms of identity politics, I think we also have to acknowledge that some racial, sexual, and religious minority groups (e.g. Muslims, Latinos and African Americans) do feel unsafe in a very real way after this election–an election which did feature some hateful, xenophobic rhetoric that went far beyond the boundaries of normal rough-and-tumble politics. So I don’t think it’s fair or realistic to, for example, expect our Muslim and Latino friends to jump on the next plane to West Virginia and go door-knocking. That partly goes the other way too–for example, I don’t expect Trump supporters to feel safe showing up at one of the ongoing anti-Trump protests either. Of course, some may be able to rise above these understandable fears, and could have a big impact if they do (as the famous example of the African American musician, who shut down whole KKK chapters by getting to know them, illustrates). And I applaud them for it.

But in general, if you have the means, and if the divisions exposed by this election make you feel–as I do–much more disappointed than they make you afraid for your personal safety, then I urge you–whether you’re liberal, conservative, or something else–to put your metaphorical knives down and get out there. Your political opponents are sure to surprise you with their nuance, and they might even surprise you with their decency.

I think centrists (something I increasingly identify myself as) have an especially large responsibility to get ourselves out there. I’m sure many of you have at times felt–as I have–that you increasingly don’t see your views reflected in either party or movement. But this also probably means–as it does for me–that you haven’t as often seen yourself or your identity singled out for hatred and violence from either side in this election campaign. So we are in a unique position to be able to lead some of the bridge-building that needs to take place.

To this end, Ian, Niya, I, and a few of our other friends have been talking about setting up some kind of initiative for starting conversations across the lines of both partisan politics and other aspects of identity (race, gender, class, religion, etc.). We would like your input on what this should look like.

One idea is a web service that randomly pairs strangers up in video chats, to discuss anything and everything they please (probably within a minimal set of ground rules ensuring decency, privacy, and open-mindedness). A second idea is to set up a matching service for strangers of different backgrounds to become pen pals. A third idea is for regular in-person conversations, e.g. a dinner with twelve strangers, hosted by two people who know each other. A fourth idea is some kind of interactive game that gets people of different background to collaborate on a shared project.

In general, the tradeoff we see with these ideas is that the closer they become to in-person, the more personal contact they will create among those who participate, but the more geographically segregated they will also become by necessity. In other words, we don’t want this to be just people having regular dinners with the same circles of people they always talk to and patting themselves on the back; we also don’t want this to be Twitter or the comment section. We suspect there is a sweet spot in between. Please help us find it.

If you would like to weigh in with ideas, please post them in the comments below or email them to submit.theteteatete@gmail.com. We hope to hear from you!

3 thoughts on “Help wanted: Breaking down echo chambers of all stripes”