Reading about the crisis in Greece these past weeks has often reminded me of a 2010 book by Australian economist John Quiggin, provocatively titled Zombie Economics: How Dead Ideas Still Walk Among Us. If you haven’t read it yet, you should.

In the book, Quiggin chronicles the ‘birth’, ‘life’, ‘death’, and ‘reanimation’ of several influential ideas in macroeconomics that have each been unquestionably refuted by empirical evidence, but nonetheless continue to be widely taught and applied. One of these zombie ideas is ‘expansionary austerity’ – the idea that raising taxes and cutting public spending is a good strategy for bringing an economy out of recession. This idea is currently running amok across Europe, especially in Greece.

The core of the expansionary austerity philosophy is that: (i) fiscal problems (i.e. high debt: GDP ratios) during recessions are caused by governments spending beyond their means; and (ii) public austerity boosts private spending, because private spending is no longer being ‘crowded out’, and because public austerity boosts investor confidence (i.e. investors feel safe investing because the government is spending responsibly and thus will not likely default on its debts or need to make big changes to the tax code in the near future). As Quiggin details, these statements don’t make sense, and expansionary austerity has been tried unsuccessfully in several past recessions – most notably in the early 1930s in Europe and the United States.

Most recessions are initially caused by declines in private spending (e.g., because of a stock market crash). When this happens, governments lose part of their tax base and demands on the social safety net go up at the same time – leading often to large short-term deficits. Pro-austerity pundits often folksily compare these deficits to overspending households needing to tighten their belts, but a better analogy would be to a household, whose primary breadwinner has lost their job, that goes into debt in order to keep paying rent and eating. (That said, there is no denying that Greece’s finances were badly managed before 2008.)

Aggregate demand – the engine of any economy – is the sum of private spending, public spending, and exports. If governments cut public spending while private spending is already depressed, aggregate demand is depressed even further. Severe recessions can then snowball as people hoard cash to weather the hard times, which only further decreases private spending, further reduces the tax base, and further increases demands on the social safety net – a pattern known as a ‘liquidity trap’. Thus, a typical result of recession-time austerity is a deeper recession and a debt burden that goes up, not down. (This certainly does not boost investor confidence.)

In contrast, government stimulus (i.e. a short-term spending increase) helps to offset the reduction in private spending during a recession and prevent liquidity traps. If the public spending is concentrated in areas like infrastructure, education, and research and development that have high returns on investment, it can counterintuitively reduce the debt burden by increasing GDP (and the tax base) – sometimes with the help of moderate inflation. This was the experience of much of the western world during the 1940s and ’50s, for example (where the war efforts and subsequent rebuilds provided massive stimulus).

Because liquidity traps are partly driven by irrational behavior, the commonly-used macroeconomic models (e.g. Dynamic Stochastic General Equilibrium – another of Quiggin’s zombies) that assume perfect (or near-perfect) rationality can significantly underestimate the effects of both austerity and stimulus on economic growth during recessions, leading to ill-informed public policy. This scenario has played out across Europe since the financial crisis of 2008, most severely in Greece.

In May 2010, the International Monetary Fund (IMF) approved a €30 billion bailout loan to Greece, which came on the condition that Greece implement a series of ‘structural reforms’, a.k.a austerity. At the time, the IMF projected that, under its required reforms, Greece’s recession would end by 2012, it’s unemployment rate would top out just under 15%, and its growth rate would be 3.8% by 2015. Instead, Greece’s GDP has fallen by over 25% and continues to fall, and its unemployment rate is an unbelievable 27% – numbers that look more like a depression than a recession. And the biggest insult of all? After five years of this pain, Greece’s debt:GDP ratio has gone up, not down.

How did the IMF get it so wrong? They drastically underestimated the impact of fiscal austerity (and stimulus) on growth. This error is nicely summarized by the figure below from a 2013 IMF report by Olivier Blanchard and Daniel Leigh (see also a related blog post by Brad DeLong). 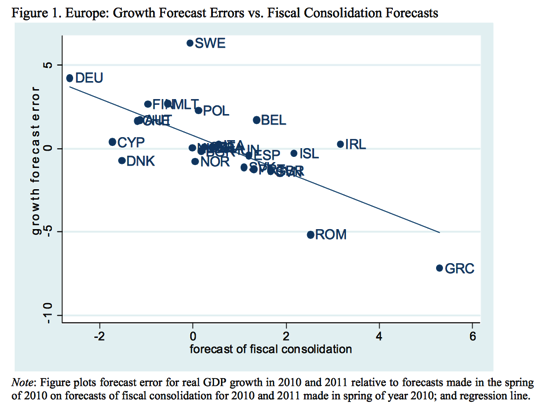 The figure compares, for European countries, errors made in
2010 and 2011 economic growth forecasts (i.e. actual % growth – forecasted % growth) to projections (made in spring 2010) of fiscal consolidation (i.e. change in government surplus (revenues – spending) as a percentage of GDP).

If the effects of fiscal consolidations (i.e.
austerity or stimulus) were accurately forecasted, there would be no relationship between fiscal consolidation and growth forecast error. Instead, we see that growth was consistently worse than forecasted in countries undergoing austerity (e.g., Greece) and consistently better than forecasted in countries undergoing stimulus (e.g., Germany).

So where does all this leave us? For Greece, many (e.g., Nobel laureate Paul Krugman) have (rightly) argued that their debt situation is so bad that they either need to default on their debt, or their creditors need to restructure the debt significantly; either way, there is no possible way they can repay it. As for ending Greece’s economic misery, some (e.g. Brad DeLong) have argued (also probably rightly) that they either need significant stimulus – probably in the form of external transfers (because they cannot borrow more money) – or to significantly devalue their currency in order to boost exports. Currency devaluation is not possible while they share the Euro with the rest of the E.U., but would probably occur if they exited and re-issued the drachma.

Regardless of how the Greek crisis is solved, its mishandling – partly on the advice of refuted economic theories – should serve as a wake-up call to the macroeconomics profession (and, to be fair, it already has for many macroeconomists). Macroeconomic policy is profoundly important to people’s well-being, and our policymakers are flying blind if a substantial fraction of the advice they are getting is coming from (un)dead theories.

4 thoughts on “Greece and bad macroeconomics”